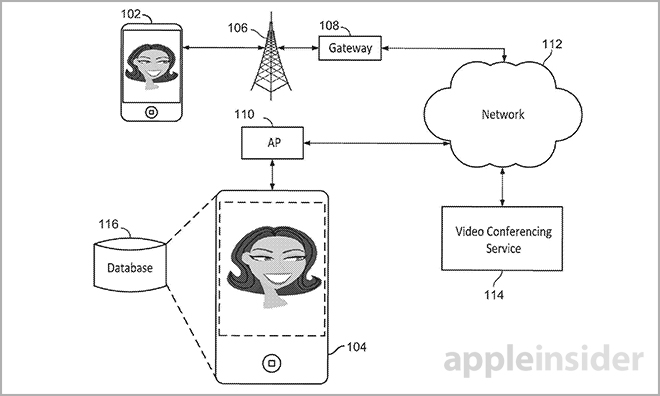 Apple Insider image of how the patent would work to morph past images in with the present ones for transmission.

Video testimony has been held by many to be a big improvement over a paper transcript. You can see facial expressions, assess the tone of voice, and evaluate delays in answering. Bill Gates learned that lesson years ago with his much-maligned video deposition with the “long pauses before [he] answered the simplest of queries…[and] the hint of contempt in his voice.”

But the “what you see is what you get” belief that we have in video may change, if the testimony is electronically transmitted.  Video testimony in the coming years might not be quite as reliable as we’d like to think.

Will it be our eyes that are deceiving us? No. It may be technology. Is this the future of law?

As per Apple Insider, in discussing a new patent issued today regarding video transmission over low-bandwidth, we may be in for a subtle but significant change. This is the problem that Apple seeks to fix:

Currently, video communication over cellular data is spotty in many areas due to bandwidth restrictions and existing wireless technology. In some cases, features like Apple’s FaceTime are nearly unusable due to dropped frames, extremely low-resolution images and poor audio quality.

How does Apple want to deal with that? By taking sample frames from the call that had been used previously and morphing them into the live conversation, to give the illusion of a constant video stream. In other words — and this is the part that would interest lawyers and judges — the visual cues from the speakers’ faces may not match with the words that are actually being used.

Again, as per Apple Insider:

The U.S. Patent and Trademark Office on Thursday published an Apple invention that replaces frames dropped during a low-bandwidth FaceTime call with pre-recorded or doctored images, thereby creating the illusion of a seamless feed.

Sometimes we see problems in movies and shows where the “sound is off” — as a fraction of a second misalignment messes with our brains. But in the Apple solution, they will simply morph old frames in so that it becomes seamless. The facial expressions you see might be for a different set of words that were previously used.

Is this a problem today? No. Will it be in five years? Check back with me then.