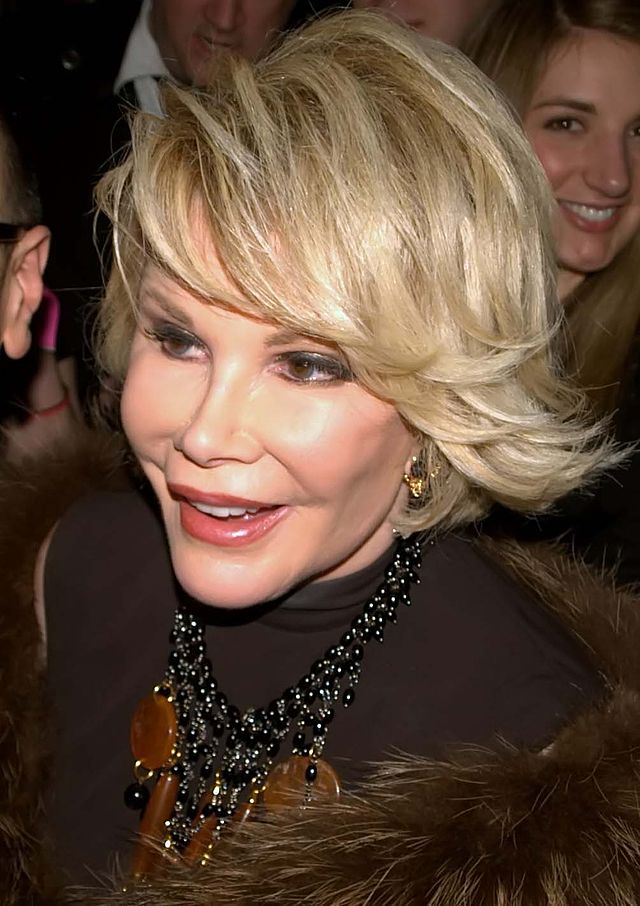 Joan Rivers in 2010, via Wikipedia

The phrase grates on me big time, that a poor medical outcome was a “risk of the procedure.” And so it is now that we see in a couple places with the death of Joan Rivers after she stopped breathing during an out-patient endoscopic procedure, that the phrase “risk of the procedure” is popping up, as if to excuse what happened.

One leading possibility for death, of course, is that it was related to the anesthesia, which Ms. Rivers likely had numerous times considering all the jokes she made about her own plastic surgery.  A sudden allergic reaction wouldn’t exactly be on anyone’s list of possible causes.

At HCP Live, a medical website, they first look at the incidence of cardiac arrest from anesthesia, and it looks positively frightening, by starting out like this:

Although perioperative cardiac arrest due to anesthetics occurs just 10.8% of time, according to the Mayo Clinic, it represents the most serious complication and can have devastating results, as witnessed by the recent death of comedian Joan Rivers.

Well, not quite. That would be 10.8% of all cardiac arrests, which itself are quite rare. Not in the HCP article, but deep into the linked Mayo Clinic article is this:

At the Mayo Clinic, the incidence of arrest primarily attributable to anesthesia was 0.5 per 10,000 anesthetics, which represented 10.8% of cardiac arrests that occurred preoperatively…

So, the incidence of cardiac arrest is actually exceedingly rare.

Moving on, the article starts goes to the potential medical excuses for what might have happened:

The surgery was apparently a minor, elective procedure, but the complications Rivers suffered reminds patients and providers that there are always risks to be considered during surgery. Some of the factors that can increase the risk of cardiac arrest during surgery include coronary artery disease, cardiomyopathy, congenital heart disease, and heart failure.

And what is missing? The failure to properly ventilate or medicate the patient.

Want to know why excusing a bad outcome by simply saying it is a risk of the procedure is so awful? Think about getting hit in the rear by another car while driving. Hey, you knew that others on the road might not be paying attention, didn’t you? Isn’t an auto collision (not an accident) one of the risks of being on the road? Do we excuse that inattentive driver because you knew that being on the road was risky?

Sometimes a deer bolts into the road and can’t be avoided. But sometimes, someone is following too close and rear-ends you because they didn’t leave enough room to stop.

What is the standard here for the Rivers matter in evaluating possible medical malpractice? The standard to look for by investigators, be they New York’s Department of Health (now underway) or the family’s private lawyer, are twofold in looking at the acts or omissions of the medical staff:

Was the act (or omission) a departure from customary and usual medical practice?

Was that departure (or omission) a substantial cause of injury/death?

Simply calling something an “accident” or saying it is a “risk of the procedure” is the type of language that immunity-seekers use (i.e. defense lawyers in the courtroom). But it isn’t the law.

The press should take note in writing stories on the subject, and be careful of the highly dismissive “risk of the procedure” lingo that may flow from some places.

14 thoughts on “Joan Rivers Death and ‘Risk of the Procedure’”