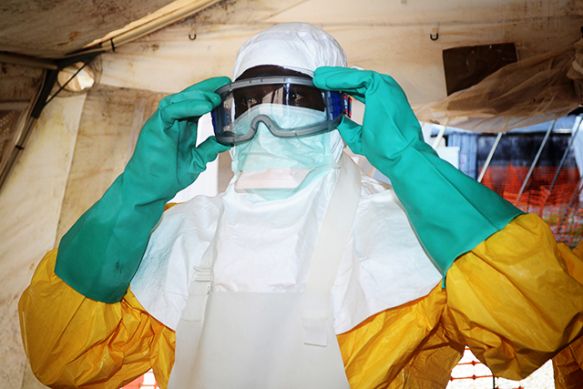 A member of Doctors Without Borders dons protective gear at the isolation ward of the Donka Hospital in Conakry, Guinea, where people infected with the Ebola virus are being treated. (Photo: Cello Binani/AFP/Getty Images)

Gov. Chris Christie was the US Attorney for New Jersey. Gov. Andrew Cuomo was the Attorney General for New York. You’d think that, with those credentials, they’d be smarter.

Each of them knows that a long view must be taken with respect to many, many issues, often with extensive evaluation of complex issues.  It took them years, sometimes, to accomplish things with litigation.

As lawyers we cite to precedents that go back decades, sometimes centuries. This is part of critical thinking and analysis.

But when it comes to the Ebola virus, they’ve both capitulated to the concept of panic first and think second.

Both governors have now imposed a 21-day quarantine on medical workers who risk their lives to go to west Africa to help save lives and fight the virus. So in addition to an involuntary deprivation of liberty for those now returning, even if healthy, they have  also made the  job of helping more difficult for these particular brands of heroes. If a doctor or nurse was willing to squeeze out a 3-week trip to help, that just became a 6-week trip.

The ostensible reason is to make it harder for the virus to come here. But the result is the opposite.

Instead of fighting the disease where it is, it is now more likely to spread with less medical care. And folks who are visiting the region will simply vanish from sight (and potential monitoring) by routing themselves to other U.S. airports, via other countries, where they won’t be subject to the long arm of government.

Even if we stopped all people and flights, the proliferation of the disease if left unchecked would just as easily go to many a European or Asian nation. It could go anywhere, since disease knows no politics or borders.

The only logical answer is to stop the disease where it is. Does that mean risk that a few people might come back sick? Of course. But a few sick folks here now is a whole lot better than many sick people here later. It isn’t about picking a good course of action over a bad one, but picking the one that is less bad.

We should be encouraging people to help if they have the skills, not discouraging.

The short-sighted plan runs counter to the long-view training both Christie and Cuomo have as lawyers. They should both be embarrassed for their blundering pandering to the ignorant panicers.  The times call for the type of deliberative long-term evaluations and critical thought that they had been trained to do, and they failed.
——————–

One thought on “Ebola and the Failure of Lawyering (Updated)”