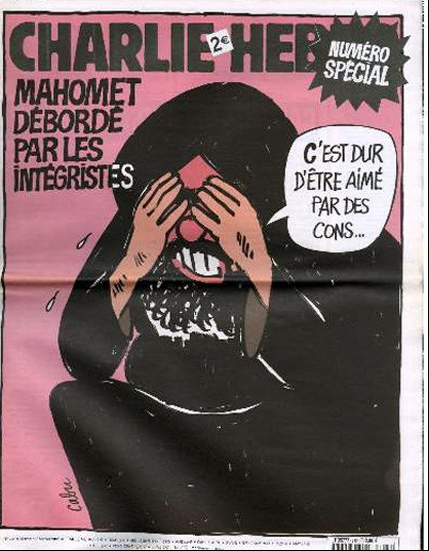 Translation: Mohammed overwhelmed by fundamentalists
Bubble: It’s hard to be loved by idiots

Two of the cartoons on this page are caricatures of the prophet Mohammed. Before yesterday, I couldn’t imagine circumstances where I would publish them, both because this blog doesn’t deal with religious issues and because such caricatures are offensive to Muslims.

I just don’t run around looking to insult the religious beliefs of others. To each their own, so long as it doesn’t impact others.

But I also write and publish and enjoy the magnificent freedom of speech. I’ve been discussing that subject a lot recently, though that was due to attempts to silence by force of law, not guns.

It doesn’t matter if we approve or not of the content of the magazine’s speech. That has nothing to do with the right to publish it.

What if we allowed ourselves to be intimidated into silence by force of guns on the subject of religion? What other subjects would be next? And who gets to make those decisions?

If we do not stand up to people now that wish to take away the fundamental right to express opinions, then when will it happen? And if not us, who then?

The answer to speech with which we disagree is more speech, not less. 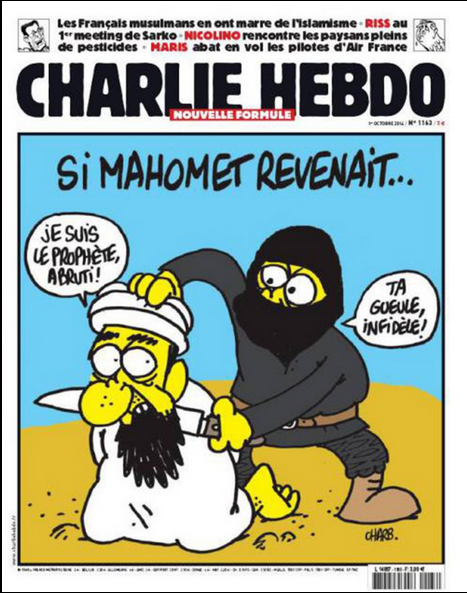 Translation: “I am the prophet, asshole!” “Shut up, infidel!”

I think that the vast majority of Muslims are appalled by what has been done in their name. And now, because a small group of people have bastardized their religion, they see these depictions getting widespread dissemination.

We must, however, choose between the lesser of two evils. Do we remain silent in the face of violent attempts to censure, or do we speak out and insult perfectly innocent people in the process?

But there seems to me to be little alternative other than to stand up to evil, and the sooner the better. I suspect that those innocent Muslims know this all too well, as the militants within their religion may have killed thousands of Jews, Christians and Hindus around the world, but mostly they have killed their fellow Muslims. And done so by the millions.

The slaughter yesterday, and the need to respond, reminds me of a poem:

First they came for the Socialists, and I did not speak out—
Because I was not a Socialist.

Then they came for the Jews, and I did not speak out—
Because I was not a Jew.

Then they came for me—and there was no one left to speak for me.

Let’s hope that the pen is indeed mightier than the sword. You can see a wide selection of cartoon responses compiled here and here. But this is the one that I will close with, from Philadelphian Rob Tornoe: 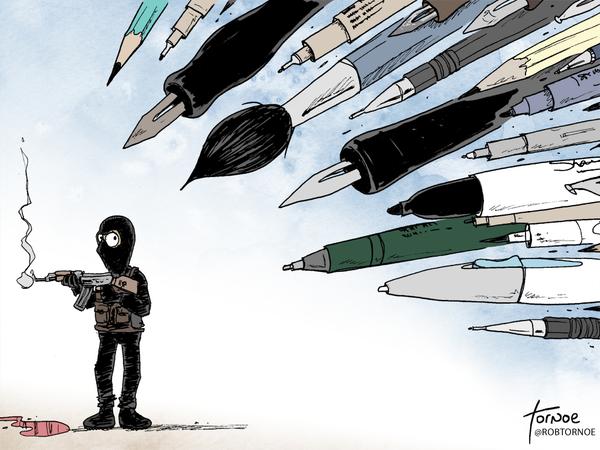