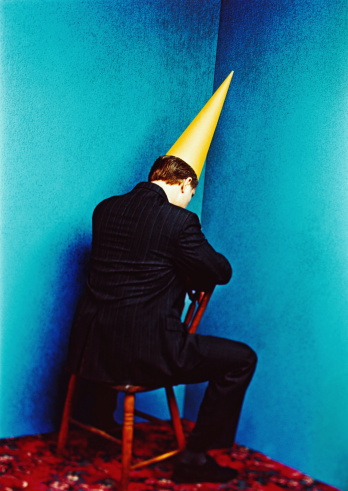 A new graphic, for lawyers that bring idiotic defamation cases: The dunce cap.

So I bring lawsuits for a living. And I’ve repeatedly railed against the tort “reformers” that seek to limit suits.

But now I’ve been sued twice in idiotic defamation suits for my writings on this blog,  both of which were thrown out in the pleadings stage. The first was Rakofsky v. Internet and the second was by Dr. Michael J. Katz.

It’s reasonable to ask (as Daniel Fisher did yesterday in Forbes) since I’ve now been on the other side of the “v” twice: Have my thoughts changed on the subject?

And the answer is no.

True, these were both a pain in the ass and a diversion of both time and resources for me.

But the answer to such suits is not to close the courthouse doors by offering protections and immunities against suits — for the real damage and danger there is closing the doors to legitimate issues.

No, the real solution is punishment with the proper use of sanctions. In both cases against me the judges refused to sanction, despite the fact that the cases were such dogs.

We have, I think, a judicial culture in New York against punishing frivolous and idiotic behavior in our courts. Compare, for example this federal judge in California lowering the boom on a frivolous suit against the National Law Journal that was also reporting on courthouse activities.

The laws are on the books (see CPLR 8303-a). They may not be strong, but the Legislature put them there. That is the place to seek redress for the boneheaded suit. Not closing courthouse doors.

4 thoughts on “On Suing and Being Sued”