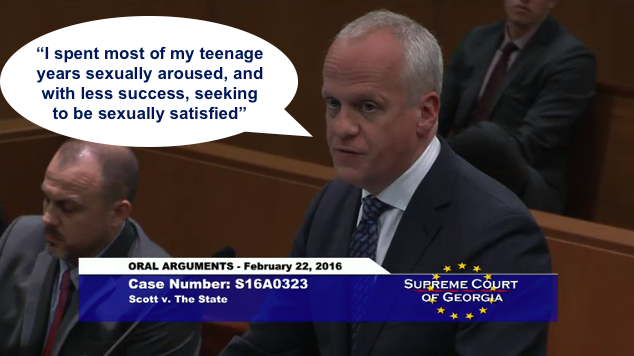 Mark Bennett, before the Georgia Supreme Court. Yes, that is an actual quote. (Graphic by Marc Randazza.)

Do you ever wonder, when reading a law blog, just how well that writer actually actually practices law? Standing in the courtroom well in front of a jury or appellate panel, after all, ain’t the same as pounding a keyboard.

Yesterday I got to watch one in action, that being Texas criminal defense lawyer Mark Bennett. He writes at Defending People, and is the author of, quite possibly, the most important blog post ever written about potential clients, which is important because it also deals in more general terms with crazy people on the internet. And let’s face, this web has lots of crazy. He gives 10 short Rules.

Anyway, Bennett has a side interest in First Amendment defense, as legislatures often try to criminalize certain speech. He’s successfully argued that several laws are unconstitutional and and has a wish list for more. One of them is in Georgia.

So yesterday found him standing in the Georgia Supreme Court arguing about dirty talk to juveniles (Scott v. The State). I watched from my desk via video feed (found here, last one at bottom).

To illustrate his point, Bennet said, in words I never thought I would hear in a high court:

But I’m not actually here to write today on the legal issue that Bennett covers often at his blog (see Scott Greenfield on the merits), but rather, to answer a simple question: Does this writer have the chops as a lawyer? The problem is that all I ever get to see — all the vast majority of people get to see — is his writing and opinions.

And the answer is a huge, unqualified yes.  Bennett was poised, well-spoken, fluid and in absolute command of his material, He quickly (and voluntarily) gave up points that were not important to him instead of stupidly arguing them. The facts of this case? Not important, he said, because his argument had to do with the scope of the law, not the particular facts of the case.

He used language and examples (himself as a teenager) to make his critical point, one that is easily understandable because he wasn’t the only one in that courtroom that was once 15. And he delivered that key argument so smoothly you would think it had just popped into his brain.

I’ve watched many people argue in trial and appellate courts over the years. Compared to others I have seen, Bennett was top notch.

Many years ago I started a category for this blog called Inside the Well, because standing there and talking on your feet and taking questions is a whole different beast than writing. I wrote once, for instance, about one lawyer that fainted in the well.

One of the other links you will find there goes to a piece on Professor Mary Anne Franks, who blocked me on Twitter when I inquired about a cite she had given. This was wonderful stuff because it stood as the absolute, 100% opposite of what a lawyer actually does. If she were actually admitted to practice law, nobody in their right mind would want Franks to represent them.

On one prior occasion I got to watch a law blogger in action, that being Marc Randazza when he came to New York to argue the motion to dismiss in Rakofsky v. Internet, for which I was local counsel and for which Bennett happened to be one of our many law blogger clients that had been sued. He too was terrific standing in the well to argue, with an absolute command of his material.

And so this little post answers a question some of you may have, at least about the particular high profile law blogger. Yes, he has the chops.

One thought on “Mark Bennett – Standing in the Well”