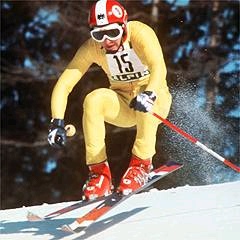 Franz Klammer was not involved in this incident, but he makes for great art work for the blog.

An interesting case yesterday out of New York’s Appellate Division, involving a skier that crashed into a snowboarder at the base of the bunny hill, badly injuring the boarder.

Most lawyers wouldn’t take such a case due to the assumption of risk doctrine.  I’ve discussed that before, as it often provides immunity to the one that caused the injury. Assumption of risk, as I described previously regarding an injured softball player, provides that:

a voluntary participant in a sporting or recreational activity  consents to those commonly appreciated risks which are inherent in and arise out of the nature of the sport generally and flow from such participation…If the risks of the activity are fully comprehended or perfectly obvious, plaintiff has consented to them and defendant has performed its duty.

So wouldn’t that apply to a skier that clobbered another?  The defendant in Horowitz v. Chen moved for summary judgment on that basis.

Not so fast, said the appellate court. The defendant, it seems, was moving at 20 to 30 kilometers per hour (yes, that is the way it is written), and the plaintiff was standing in a crowd at the bottom of the beginners’ slope.

While participants in sporting activities may consent to the commonly appreciated risks inherent in a sport, the court said that doesn’t mean that they consent to “conduct that is reckless, intentional or so negligent as to create an unreasonably increased risk.”

The court noted that this occurred in or near a marked safety zone, and that the defendant skier was zipping along in this area despite “his awareness of his limited abilities to safely handle such speed under the snow surface conditions presented.”

The court also noted the extent of the injuries (not described in the opinion), writing that “in view of the significant injuries sustained by plaintiff, reasonable inferences may be drawn that she endured a violent collision, which raises an issue as to whether the speed at which defendant was skiing was reckless under the circumstances.”

Now the important part, for New York practitioners. This case came out of New York’s First Department. (NY has four, for you out-of-towners, the First covers Manhattan and the Bronx.) In rendering its decision, the court cited to two other cases, one in the Third and one in the Fourth.

So this represents a little new ground on the subject area of assumption of risk. If conduct is “so negligent as to create an unreasonably increased risk” then the assumption of risk doctrine can be overcome, at least for the purposes of surviving summary judgment.

And last, just because I feel like it, the legendary 1976 Olympic downhill run of Franz Klammer: