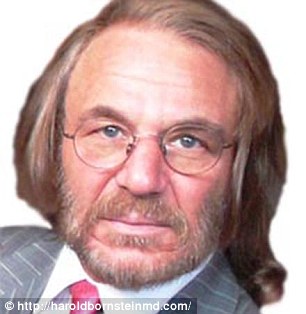 With the health of the two presidential candidates, aged 68 and 70,  in the news, it’s worth revisiting the statement given out by Donald Trump’s gastroenterologist, Dr. Harold Bornstein. You may remember this from last December for its comical and very Trumpian statement:

“If elected, Mr. Trump, I can state unequivocally, will be the healthiest individual ever elected to the presidency”  (Full letter)

Yeah, that Harold Bornstein. Dr. Jen Gunter did a full, line-by-line, deconstruction of the letter at the Huffington Post: I’m A Doctor. Here’s What I Find Most Concerning About Trump’s Medical Letter.

Well, it turns out the letter was even worse than Dr. Gunter thought. And that is because of the signature block, where Dr. Bornstein signs his name with “F.A.C.G.”

That stands for Fellow of the American College of Gastroenterologists. In order to be a Fellow, one must be board certified and pay your dues to the organization. And being board certified is a very big thing for doctors, since it entails taking a grueling test to show that you have the knowledge to be an expert in your field.

The gastroenterology boards are a subspecialty of internal medicine.

Yet Dr. Bornstein continues to use those initials after his name.

Dr. Bornstein, incredibly, responded to Madow’s request for comment and said that:

F.A.C.G. is a title that they sell for a fee; in reality it has no value.

He then went on to explain to Madow that he would continue to use this title that “has no value.”

Now that I have given you the past, let me stand on the shoulders of Gunter and Madow to go further with some facts and opinion: What he is doing is fraud.

The website for the New York State Department of Health, gives examples of medical fraud:

You can see the one that I highlighted. I posted all of the ones listed so that you can see the significance of the infraction. Not significant to me as someone tossing around opinions, but to the Department of Health.

Is this something that the Department’s Office of Professional Medical Conduct (OPMC) should be investigating? Maybe.

While not discussing Bornstein/Trump in particular, since he doesn’t have knowledge of the facts, he said that investigation and charges of professional misconduct could theoretically be pursued regarding a physician with a false credential for:

If the doctor were indeed board certified, OPMC would not pursue discipline unless it received a complaint or if a patient was injured.  If one of those two things happened, he would likely be asked to consent to an interview and be asked to change his ways.

The kicker for me, though is that he apparently already knows what he is doing is wrong. And has refused to change it.

4 thoughts on “Should Trump’s Doctor Be Sanctioned for Fraud?”