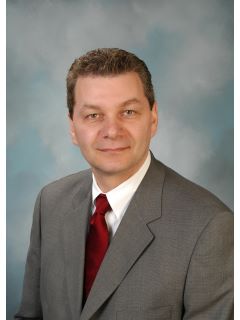 Way back when, I remember hearing dark humor about how to find an available apartment in NYC: You check the obituaries.

And in The Verdict, Paul Newman’s character does a similar thing — he shows up at a funeral to offer his attorney services to the widow.

And now, courtesy of a Century 21 Supreme Realty real estate agent, we get actual documentation of this in practice.  For reals.

Back in June, Michael Popper of Plainfield, NJ had a horrible kayaking accident that cost him and his guide their lives when a front came in followed by waves that capsized them. His wife Jennifer, now a widow, was involved in the same accident and clung to her kayak for hours in the 52 degree water before rescue.

It’s the stuff of nightmares.

But Century 21 Supreme Realty agent Romauld “Ron” Mioduszewski, (link) of Cranford, NJ, decided this was a good financial opportunity. For him. So he sent Jennifer Popper a letter, starting with faux-condolences, followed by a pitch for his business.

If this was a one-off type of event, I might not bother to write about it, as it does stray from my legal wheelhouse. But this could not have been an isolated letter.

And the reason I think it wasn’t an isolated letter is because it was a fill-in-the-blanks form letter. And Mioduszewski didn’t bother to fill in the blanks.

That’s right, adding insult to tragedy, he dropped in the mail a letter that started like this, with my notes in brackets:

I would like to start this letter by offering my sincere condolences on your recent loss of [name not filled in] . Losing a loved one can be a very difficult and stressful time. This letter can be compounded when you start to receive numerous letters from investors looking to purchase the property, located at [address not filled in] and you are unsure as to what options are available to you. Having experienced this situation myself, I can sympathize with what you are going through. The main point of this letter is to make  you aware that.

That’s right, he didn’t even fill in the name of her husband for his “sincere” condolences. He blamed others for the “numerous letters from investors” of which he was actually trying to be one. And he claimed to have “experienced this situation myself,” but it is beyond belief that any human who had experienced such trauma could actually send such a letter.

Jennifer posted the letter on Facebook, and then responded yesterday on the Facebook page for that realty office:

Dear “Ron” Mioduszewski – I’d like to start this Facebook post by saying you’re no better than the investors of whom you claim to warn me. By the way, you could have easily found out the name of the person you were offering condolences about instead of writing absolutely no name at all. Pathetic.

The questions to ask here are:

I reached out to Mioduszewski for comment but he wasn’t available. If he responds, I’ll update. (Updated now, below letter)

But inquiring minds want to know the answers. The letter, is here, in all its wretched ugliness: 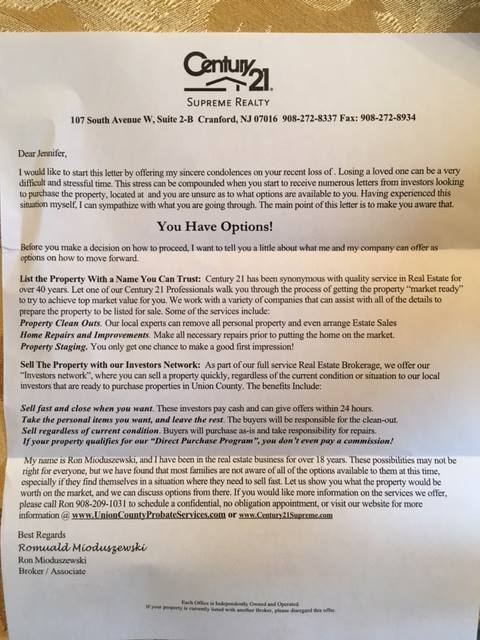 Updated:  Mioduszewski  called me back. He said he created this form months ago and uses it “on all my probate matters,” sending it twice to each home. He said he didn’t know how many times he had sent it out, and that he was the only one in the office that used it.

Mioduszewski  also told me that the letter going out this was was a “computer glitch.”

He defended the use of the letter, saying that this was a service he provides. When asked how he would have felt if he had been in a similar situation and received it, he said that, “being a real estate agent, I would have just blown it off.”

He said nothing about having “experienced this situation myself,” as he claimed in his letter.

7 thoughts on “Chasing the Hearse (Updated)”