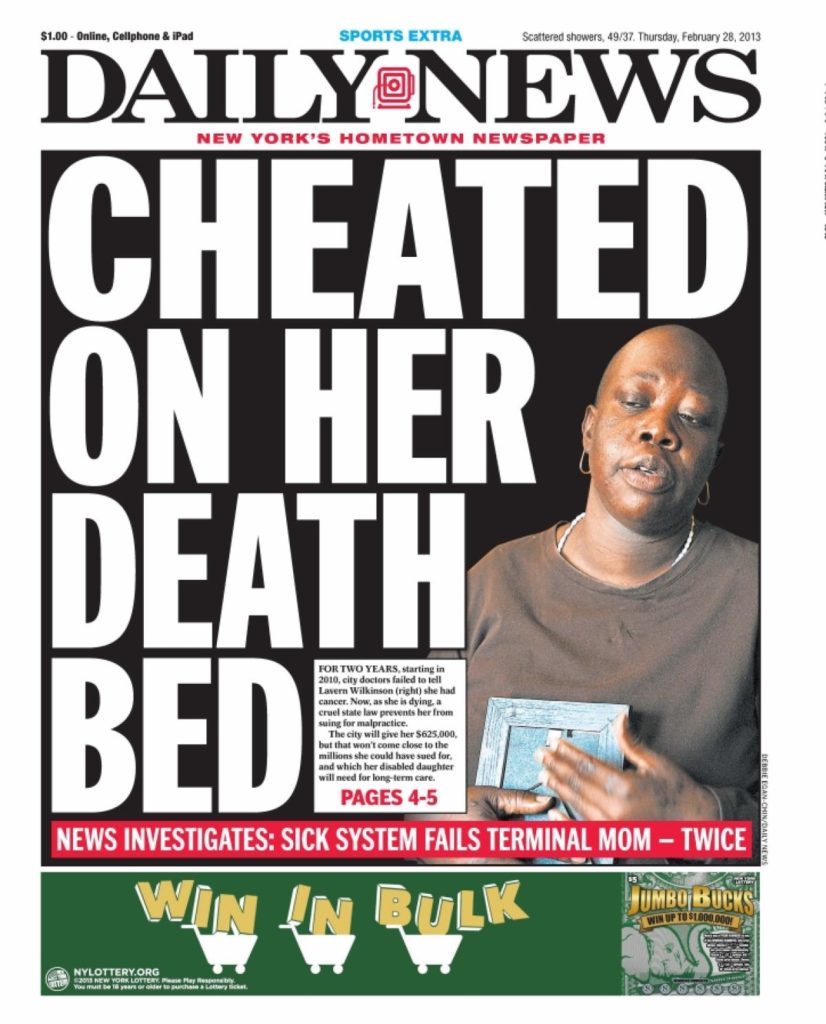 Lavern Wilkinson, who lost her chance for justice before she even knew she had that chance.

A couple of weeks ago I wrote a piece about why you should sign Lavern’s Law, which has been sitting on your desk for weeks now as the only bill out of 600+ that you’ve failed to act on from last year’s legislative session.

But in my list of reasons to sign a bill that starts the statute of limitations in failure-to-diagnose-cancer cases from the date the malpractice is discovered (as opposed to when the malpractice happens) I neglected to mention one thing.

Lavern’s Law will save taxpayer funds.  As it stands now, if someone loses the right to sue before they ever even knew that malpractice occurred, there’s a pretty good chance that Medicaid will pay out much of the medical expenses. And those kinds of expenses can add up.

But if suit is permitted then much of the money can be recovered from the people actually responsible for the unnecessarily diminished health of the patient.  Medicaid often recoups money paid out from such lawsuits.

And the best part, from Medicaid’s perspective, is that a private attorney is doing all the work. There is virtually no cost to the state other than contacting us every so often to find out the status of the suit, and settling up if the recovery is partial.

So the question is — aside from the moral and public policy issues I already addressed — who should bear  responsibility for the medical costs of malpractice? The party that was negligent? Or the taxpayers?

There are reasons this bill enjoyed wide support from both Democrats and Republicans and why similar laws exist in 44 states. Yes, that’s right, even deep red states have such laws.

As with many laws, there is an issue of, “When does this become effective?” The very powerful health care lobby was concurred that malpractice from 5 years ago — if it hadn’t been discovered until after the statute of limitations had expired — would now become actionable.

The bill was, therefore, tinkered with a bit for past acts of malpractice, so that it would no longer allow patients to revive already-expired claims that occurred up to seven years prior. Instead, a patient could file for a cancer claim that expired within the last 10 months and file the claim for an additional six months.

But on the whole, a big victory for civil justice. The Daily News, which has long championed this legislation, has an editorial celebrating the event, writing:

It took too long — indeed, far longer than the time stingily allotted Lavern — but first the Assembly, then the Senate had the wisdom to open New York’s lawsuit window despite opposition from the hospital lobby.

The version of the legislation to earn Cuomo’s signature will include adjustments to be passed this week at the governor’s insistence. Albany being Albany, the bill that passed both houses of the state’s Legislature wasn’t good enough for the governor, so Cuomo brokered a deal with legislative leaders to force through amendments.

Oddly, the law will only cover malpractice related to cancer. Why? Malpractice comes in all forms. Fix that, stat.

It’s also a shame that Cuomo doesn’t dare open the door to past patients, beyond 10 months ago.

Still, take comfort that Lavern smiles down on all who trust their lives to medical professionals sometimes fatally imperfect. Her law and legacy demand they do better.

One thought on “Lavern’s Law Will Save New Yorker’s Money (Updated!!!)”