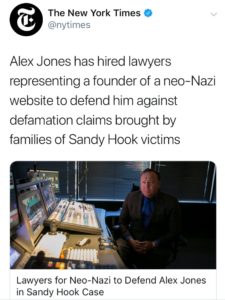 If Democrats aren’t careful they risk surrendering a core American value to conservatives.

I don’t usually write about partisan politics, because if I did I would never stop, but in this case it deals with the First Amendment.

By way of background, it seems that liberals lost the use of the American flag as conservatives appropriated it as their own. This, no doubt, began in the 1960s when antiwar protesters started burning it.  Liberals have struggled to recover.

Stephen Colbert built an entire satiric show around the concept that waving the flag somehow meant that you were patriotic — while ignoring the values that the flag stands for.

A similar battle is now taking place regarding another potent American symbol, the national anthem.

We may now be seeing yet another version with a battle over the First Amendment. The New York Times decided, in a fit of epic stupidity, to highlight that right wing nut job conspiracy theory propagator Alex Jones hired noted First Amendment attorneys Marc Randazza and Jay Wolman to defend him in a defamation suit from the parents of Sandy Hook massacre victims.  Crackpot Jones claimed the massacre was a hoax.

This is what we lawyers like to call in legalese, logical. Because if you have a First Amendment problem you’re not going to hire a matrimonial or real estate attorney. When I was sued for defamation the first time, in the infamous Rakofsky case, I was part of a large group of lawyers who hired Randazza. There was a damn good reason for it.

But no, the Times decided to highlight the fact that Randazza also represents a Nazi in one of his other First Amendment defenses. Note to the Times, which should know better:  If you’re going to represent free speech issues you are not likely to be representing the late Mr. Rogers and his neighborhood. You will sometimes defend people out on the fringes of society, many of whom are widely detested. Benign language that the majority loves isn’t where free speech battles are fought.

This article was a follow-up to an Adam Liptak article in the Times about the First Amendment being “weaponized” by the right.

Lets be clear:   The First Amendment is not an issue of the left or the right, as all people benefit from its protections.  Those who defend the First Amendment firmly believe that an infringement upon it is an infringement upon everybody’s rights, regardless of whether you come from the left or the right. Lawyers that defend free speech are not really defending the speaker. They’re defending the constitution.

This is not to say that the Democrats are the only fools in this battle over American symbols. The Republicans, for example, have lost the Statue of Liberty as they elevate bigotry over the statue’s central message.  Why it is that Democrats have not created a flag with the torch of liberty to constantly wave remains a mystery to me. This will haunt the GOP for decades to come.  That issue was a gift to Democrats, just as surely as the burning of American flags was an inadvertent gift to Republicans.

And so, dear New York Times, don’t be so quick to make the First Amendment a battleground of partisanship, the way it has for the flag, anthem and statue. It will not end well for those who believe in free speech. And that doesn’t just mean not ending well for you as a major media outlet, but for all Americans.

2 thoughts on “Are Democrats Losing the First Amendment?”