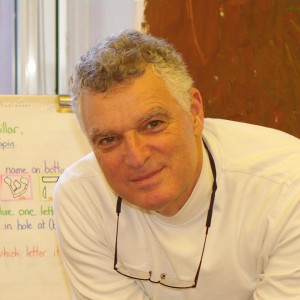 Last Monday, I wrote up the story of Dr. Joseph Tuvia, a local radiologist who seems to have a propensity for vastly differing signatures made under penalty of perjury. And when I say vastly differing, I mean no person in their right mind would think they all belong to him. And I also mean a graphologist that had examined them is ready to swear under oath they didn’t all come from the same hand.

Then, as fate would have it, he took the witness stand Thursday in an unrelated matter in the Bronx. When you review 1,000 films a year for litigation, it’s inevitable you’re going to be back on the stand.

The lawyer that was going to cross-examine him had seen my posting, as well as a Village Voice piece in its Runnin’ Scared  blog that contained this:

Runnin’ Scared spoke to Jeffrey Levine, the lawyer who initially noticed the signatures when representing a client in an arbitration with Allstate Insurance. Levine hired a graphologist to test the authenticity of the signatures.

The graphologist confirmed Levine’s suspicion: The papers were signed by different people. “Do you really need an expert to see the difference?” asks Levine.

The lawyer in Thursday’s case, Ken Ready, brought the articles to court. He put the Village Voice piece prominently on his table so that Dr. Tuvia could see it.

Scott Greenfield explains why those signatures under of perjury are so important to the administration of justice, in posting about civil law meeting the criminal law.

What, exactly, would Dr. Tuvia do when confronted with them on the witness stand? He certainly knew about the articles, as both the Voice and I left messages at his office seeking comment.

The criminal defense attorneys that read this blog would likely have all said the same thing: Stay the hell off the witness stand!!!

But there he was on the witness stand. And this is what happened:

First up, were the issues of a CT scan and an MRI. And he came to court, on behalf of the defendant, to testify without the films. You read that right, he got on the witness stand to testify about films he didn’t have with him, that weren’t in evidence, and with a report that had a signature that differed from his signatures on other reports.

Now if you’re plaintiff’s counsel, you have two choices: First, you object to his testifying about things not in evidence. A law student could guess that choice. Alternatively you let him testify and make a fool of himself which may help you in the long run as it exposes the frailty of the defense. Plaintiff’s counsel in this case, Ken Ready, elected to let Dr. Tuvia play the fool.

Next up, and the real reason you are still reading this, what did Dr. Tuvia say about all the differing signatures? Answer: He claimed they were all his. Specifically: 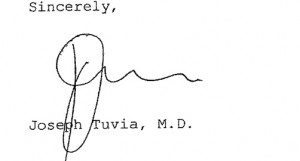 He testified that the top signature you see to the left, marked for identification at trial as Exhibit 15A, was his. 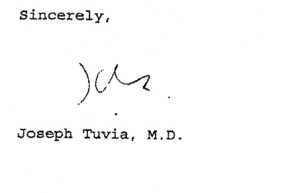 He testified that the second signature to the left, marked for identification at trial as Exhibit 15B, was his. 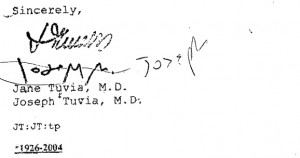 He testified that the third signature to the left, marked for identification at trial as Exhibit 15C, was his. Since there were two signatures there, he had him sign to see which was his, and the “Joseph” that you see on the right side of that third image was the result, looking like neither of the others.

He testified that the fourth signature to the left, marked for identification at trial as Exhibit 15D, was his.

And yes, he testified that this fifth and bottom signature to the left, marked for identification at trial as Exhibit 15E, was also his.

Five differing signatures were marked for identification. And he was questioned under oath about all of them them. Then he added a sixth, “Joseph,” which looks nothing like the other five.

Mr. Ready explained to me what transpired:

He stated under oath that all 5 signatures – one at a time – were his. One of the signatures was off because – as he explained – he was tired. I had him write his name next to his signature on Exhibit 15c because there were two signatures on the page. He testified that there may have been a time or two that someone else signed his name but that it was quickly corrected by him signing later.

An interesting note about the documents is that all five are addressed to D&D Associates, one of the “facilitators” (brokers) for the insurance business. One of the big questions, of course, is that if the differing signatures are not that of Dr. Tuvia, then who wrote them? Is it D&D staff? Is this going on with other “frequent flyer” examiners/testifiers that are part of the insurance industry medical mills?

I raise that issue because that is what the New York Times found in a 2009 exposé regarding Workers’ Compensation exams,writing that “Reports were sometimes altered by brokers…”

And if not D&D, and if not Dr. Tuvia, then who is signing these reports under penalty of perjury for Dr. Tuvia?

Unfortunately, Justice Mark Friedlander, who is hearing the case, didn’t allow them into evidence. They were, as we lawyers like to say, collateral to the case the jury was hearing.

This presumes, of course, that this posting doesn’t stay hidden in my teensy corner of the cyber world. Hopefully, if the prosecutors ever get an investigation up and running, they will see that this is just one small issue of a much bigger problem regarding insurance company exams.

I hadn’t expected, frankly, to be continuing this series on quickie medical-legal exams as long as I have. But now that I’ve started, stories keep rolling in about, what looks to me, like clear shenanigans that just so happen to have profound effects on people’s lives. And they are rolling in because we have a very serious problem here in New York.