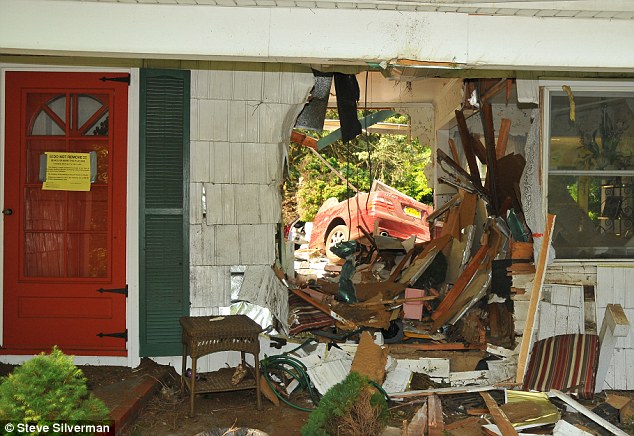 Daniel Sajewski drover his mother’s Mercedes right through a house

When I write a headline entitled “Crashing Through the House,” it’s most likely because the car and driver literally crashed through a house.

Ya’ think there might be some law out of this? That’s why I’m here. You’re welcome. Let’s get started.

First off, and coming as no great surprise to anyone, Sajewski was bombed out of his mind, blowing .30 on the breathalyzer, more than a wee bit over the limit in any jurisdiction that has any laws at all. (Depending on which story you read, he was downing shots of Jack Daniels, tequila and drinking beer.)

And then there was the part about Sajewski asking his then-girlfriend Sophia Anderson to take the rap, and claim she was the driver. He promised, according to news reports, to cover her legal bills and take her on vacation.

I’m betting you’ve already guessed that this deal, shall we say, came apart.

Sajewski had, at the time, six outstanding warrants on six different cases, suggesting he was not exactly a leading light in his community. He’d been charged with drinking on the subway, possession of marijuana and failure to complete community service for a previous conviction.

He had a record for petty theft and other drug possession charges, as well.

Sajewski ultimately pled guilty to driving while intoxicated, reckless endangerment and making false statements. He was sentenced to one-and-a-half to three years behind bars.

Now this is the part where I come in, the civil side. State Farm, which insured the house, coughed up 180K in insurance proceeds resulting from Sajewski’s demolition derby. (The two 90+ year old sisters who lived there were both unharmed.)

State Farm wanted its 180K back, and sued the driver, Sajewski, Jr. as well as his father, Daniel Sajewski, Sr., as Papa actually owned the car.

Papa Sajewiski said, in effect, let me out of this suit because my ne’er-do-well kid took the car without permission.  Not my fault!

Junior Sajewski supported his papa, and agreed that he took the car without permission. (I know! You’re shocked that Junior would help out his papa after wrecking the house of a couple of 90+ year old sisters and wrecking dad’s fancy car!)

But. Not so fast. In New York, it’s not just drivers of cars that are liable for the damage, but the you see, the owners also. (VTL 388(1)). This makes sense because owners are in the best position to evaluate the competence of the people they lend their cars to.

In the trial court, the judge said in legally sounding language, no way, no how, you ain’t getting out of this suit. Owners are responsible too.

But Papa pointed out that, while there is a strong presumption of permissive use of the vehicle, that presumption is rebuttable. And look here at the two affidavits of Papa and Junior, both saying that there was no permissive use.

Papa appealed. And yesterday, he got shot down again, this time by the Appellate Division, Second Department.

The court was pretty clear about this. For even though the testimony of no permissive use was un-rebutted by any other source, that is not always enough. While the court didn’t write the back story with four-part harmony (and feeling), it had the briefs. And they noted that the improbability of a story, or the interests of the witnesses, could effect how a jury perceives the evidence. The court wrote that:

[i]f the evidence produced to show that no permission has been given has been contradicted or, because of improbability, interest of the witnesses or other weakness, may reasonably be disregarded by the jury, its weight lies with the jury’

So the question will, one day, go to a jury, where it belongs. Because questions of fact aren’t for the court.

And given the long history of legal trouble that Junior’s been in, I’m willing to bet that a jury will wonder why Papa didn’t hide the keys if he really didn’t want Junior to drive. And I’m not the only one to wonder why, as the court noted:

Just remember this story the next time you loan a car to someone that might be somewhat less than reliable. Because you can be on the hook.