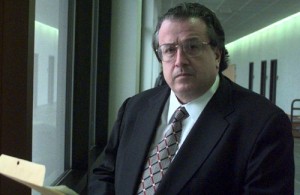 Fresh on the heals of being hit with an 18-month suspension from practicing law, high profile lawyer Dominic Barbara has decided to retire according to the New York Law Journal.

The suspension came after 20 prior sanctions from 1988 to 2009, with the Appellate Division citing the “avalanche of Grievance Committee sanctions” as a motivating factor. Barbara, who primarily did matrimonial and criminal law, was also involved in a high profile personal injury matter last year regarding the death of eight people on the Taconic Parkway from a drunk and stoned driver going the wrong way.

His notoriety stems from handling high profile clients such as Joey Buttafuco and Jessica Hahn, and frequent call-in appearances to the Howard Stern show.

“The Appellate Division has a very difficult job to do ruling on what the findings of the grievance committee are and I’m sure what they did, they felt was right…I’ve been a lawyer for 40 years, and am 65 years old, and it’s just a sad way to end my career. But, on the other hand, life goes on.” 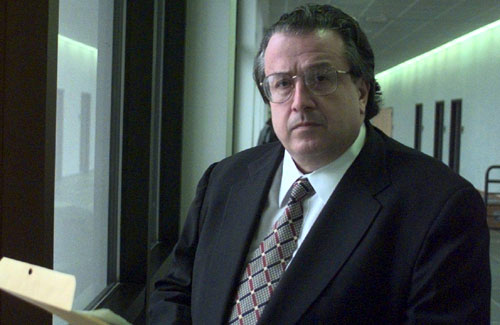 Part of this short story is about a lawyer named Dominic Barbara, who previously represented Howard Stern (and is a regular side-kick, call-in guest on his show). He also represented Joey Buttafuco, Jessica Hahn, and Michael Lohan, each of whom had more than their allotted 15 minutes of fame. New York Magazine once called him the “biggest, brassiest lawyer on Long Island.” And last year he was retained for a headline making crash on the Taconic Parkway that killed eight people (video).

But the more important part, to me, is the fact that what you see on a lawyer’s website, or in the newspapers, isn’t always what you get.

First, as to Barbara. He was suspended this week after “an avalanche of Grievance Committee sanctions” (nine Letters of Caution, nine Admonitions, and two Advisements). That’s a lot of baggage, and as a consequence of the latest round he was handed an 18-month suspension.  Among the charges, and these seem to be the straws that broke the camel’s back, are that he failed to issue itemized bills as required, failed to supervise the lawyers in his office, failed to timely refund a portion of a fee that had not been earned after the client fired him, and engaged in conduct that adversely reflects on his fitness as a lawyer by failing to adequately communicate with that client (or her new counsel).

But here’s the thing, despite this “avalanche” of sanctions, he has this to say about his firm on  his website:

For more than 35 years, The Barbara Law Firm has performed at the highest level of quality legal representation in the fields of Family, Matrimonial, Criminal, and Civil Law.

The highest levels? I think not. Not with all those sanctions. There is more puffery, of course, as he tries to parlay  the celebrity clients into more business:

Dominic A. Barbara has been leading this firm for more than 30 years, providing personal, assertive, successful legal representation to clients from all walks of life. The housewife, teacher and business owner receive the same care and consideration as the high-profile celebrities who turn to The Barbara Law Firm. Each one is looking for the same thing – a team of brilliant legal minds focusing on his or her individual case. 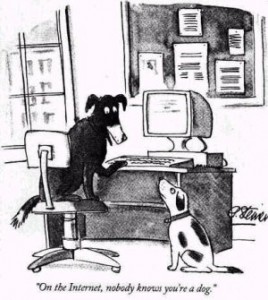 So what you see on a website isn’t always what you get when it comes to the law. Anybody can write puffery. And just because someone has high profile clients doesn’t mean that they are actually good lawyers. (I never did like that whole “celebrity lawyer” thing.) ” I once tried a case with a guy that had many high profile clients. In the well of the courtroom he was awful. And when I say awful I mean law students could do a better job. I would see him on the news after our trial and the first in my mind was this: His client is gonna hang.

The best way to find a lawyer isn’t by checking out the puffery on a website. It’s by asking around and making sure they handle the problem that you have, perhaps by starting with friends and neighbors and other lawyers who will hopefully be able to direct you to someone who knows what they are doing. In fact, this was the subject of the fourth post I ever did on this blog, more than 1,000 posts ago, when I only had six readers. They were all Bulgarian spammers.

So if you’re hunting for a lawyer, ignore that guy on the news. And certainly don’t be impressed with his website. For as the old New Yorker cartoon goes, on the internet, nobody knows you’re a dog. 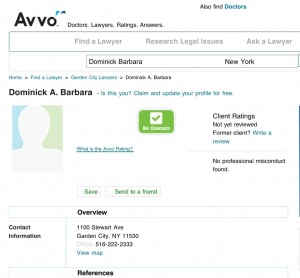 Addendum: I think it’s worth noting that this “avalanche” of Grievance Committee sanctions didn’t show up on Avvo‘s lawyer rating service, a service of which I’ve previously been critical. (This suspension hasn’t either, but I cut them slack for that because the opinion was just released yesterday.) But the point is that many disciplinary actions are hidden from public view. In other words, Avvo probably couldn’t have found the problems even if they looked. And that type of incomplete information can be rather misleading to the consumer, notwithstanding all the caveats that Avvo might provide. A copy of Barbara’s listing, showing “No professional misconduct found” is at right.

Is this your hero?  Is this your savior?  Is this the lawyer who you want standing next to you when your life is on the line?  Or is this the guy who will charge you a whole lotta money because he’s a big time “high profile” lawyer, and when you decide that he’s not the guy you want next to you despite all the puffery on his website, he won’t give you your money back? (more)

I have had clients who have come to me after a foray into his firm’s office that when they complained about the non-stop pouring of money into legal fees, that he would offer to stay on the case if he allowed them to hold a press conference about the case. (more)

(Note: Subsequent to this post, news organizations ran stories on the suspension)