On the one hand, I hate to refer to Al Sharpton’s daughter, Dominique Sharpton, as “Sharpton’s Daughter” as she has an identity all her own. We all do.

On the other hand, nobody would be writing about her $95K settlement for her trip and fall case if her name was Jane Jones. The headlines below occurred because she is not only the daughter of someone famous, but a famous person many love to pillory.  You’ll notice that it is Papa Sharpton whose name appears in the headlines.

This trip and fall occurred on New York City streets, and it was the City that was the defendant.

I saw the headline in the Post first, then looked around to see what others were writing. Here are a few:

Then a few tweets about that sprained ankle. You can find plenty, but this is a sample from “Sheriff” David Clarke:

Now I smelled something about the headlines. And that’s because I’ve litigated plenty against the City of New York and know that it doesn’t give up the taxpayer coin easily. And if the City could make a point by knocking down a high-ish profile case, it would.

So I logged into the court system and pulled up a document to see about that “sprained ankle.” It took all of two minutes to find what I needed. Here’s a bill of particulars that outlines the injuries.

It turns out that the “sprained ankle” was actually ankle surgery (along with a number of torn tendons and ligaments). Now I know that confusing a sprain with surgery isn’t the kind of mistake that I would make, or any of my readers would make, or any family, friend, or random stranger would make.

To make that “mistake” one needs an agenda to distort the news. The Post story had a single line about the surgery buried in the story, but oddly omitted that from the headline.

Neither Breitbart nor Palin — who picked up the story from the local source that being the NY Post — could be bothered with mentioning the surgery. A 95K settlement over a sprained ankle is far more likely to generate outrage and clicks than a story where ankle surgery was needed. Surgery, you might rightly guess, didn’t fit their agenda.

This was not a one-off error for the NY Post, by the way. I covered this case back in 2015 when the Post ran a headline about Kid Sharpton missing a court conference for this matter — a conference that no client ever, ever goes to. It’s a scheduling conference that the lawyers handle. Yet there was the yellow journalism headline, trying to make something out of, quite literally, nothing.

And both stories were written by their regular courthouse reporter Julia Marsh, who certainly knows better after handling the beat for so many years. It’s not like she doesn’t know how to pull documents off the easy-to-use New York State electronic filing system.

This was, near as I can tell, a run-of-the-mill case of the City of New York neglecting its streets and someone inevitably getting hurt while crossing one. When you’re looking out for cars, pedestrians, dogs, bikes, scooters and other distractions, both dynamic and static, it’s easy to miss a pothole. The nature of the distractions may well affect the way a jury apportions liability between plaintiff and defendant.

This 90-second video, for instance, helps to show how a very small, but unexpected, defect will cause huge numbers of people to trip.

To settle this case, as with any other, the City would have done a simple analysis trying to figure out the “value” of the injuries, factored in the extent of their defect and adjusted downward for the plaintiff sharing part of the blame. They would also factor in how a plaintiff appeared — was she a nun or a convicted criminal?  And they might, as they no doubt did here, adjust further downward if the plaintiff said dumb things on social media.

The only thing noteworthy to the suit was that some tabloids could figure out a way to create outrage by distorting what happened. 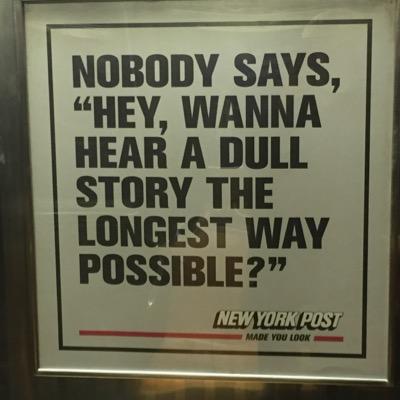 There are only two possibilities in this story regarding Al Sharpton’s daughter’s slip and fall lawsuit, for which the New York Post used this headline:

First, that the NY Post is simply bashing Al Sharpton, via attacking his daughter Dominique Sharpton, for no reason whatsoever; or

Apparently, she has a trip and fall case against the City that resulted in an ankle injury. I care not one whit about the actual details, since that isn’t the point of this post. Nor is this about Sharpton, his past, or his politics.

The point is that Dominique’s case has a compliance conference yesterday. Curious as to what kind of conference a client could possibly have missed, I looked it up. It turns out that this was a routine conference where the lawyers head to the courthouse to work on discovery issues that may still need to be completed.

Let me be clear about this: Clients never, ever, ever, go to these things. It’s the lawyers working on scheduling. These things are sometimes so routine that there is a cottage industry of per diem lawyers that will handle them for $100 a pop.

Even when they are not routine, and there are actual legal issues to be discussed, the clients still never go. In fact, in NYC, the clients rarely ever even go to jury selection in a civil case. While it might happen some places, I’ve  never seen it here.

Yet there was Julia Marsh writing her idiotic lede:

The Rev. Al Sharpton’s daughter was a no-show Wednesday for the first court date in her $5 million sprained ankle case against the city, letting her lawyer stand in for her — but the night before she was putting that ankle to go use, marching in a raucous anti-gun demonstration in Times Square.

Is it possible that Marsh simply didn’t know better? Doubtful, since Marsh covers the courts. I know this firsthand because she contacted me right after Dr. Katz filed his now-dismissed defamation suit against me. Also, her Twitter profile concedes it:

I don’t think this is what she was taught in journalism school.

There’s a reason I am deeply cynical about what I read both online and in the papers. I covered this a few weeks ago with the sensationalistically written story of the 8-year old boy who sued his aunt.  Marsh now provides another fine example.

Many strange things have happened to me as a result of this blog. I’ve been on the side of a bus, punked the New York Times in an April Fool’s gag, and found myself on the editorial page of the Wall Street Journal.

But my name in boldface on the legendary Page Six of the New York Post? Me?! Get outta here!

Page Six is where Paris Hilton was born. It’s where Kardashians and Lohans live. Where celebrities of all types go to die, both metaphorically and literally. It may be the nation’s top tabloid gossip column. Or so I am told.

According to this Manhattan Media profile:

It launches books and movies, sells magazines, and makes and breaks restaurants, reputations and sometimes marriages. It has followed the exploits of Hilton and Pamela Anderson and broken news of scandals that became Page One stories. It got the first scoop on Marla and Donald, and more recently on Ellen Barkin throwing water at Ron Perelman at the Waverly Inn. In the world of politics, Page Six has uncovered former Secretary of State George Schulz’s posterior tattoo and the rift between Presidents Carter and Clinton, and it had a field day with the “portly pepperpot” that Clinton “canoodled” with, aka Monica Lewinsky.

What did I do to deserve such an honor!?

The article I was boldfaced in was, ostensibly, about recently arrested New York State Assembly Speaker Sheldon Silver. In order to make news, Page Six Grand Poobah Richard Johnson discussed — are you ready to follow these connections? — that Silver simultaneously worked for Weitz & Luxenberg as a rainmaker.  OK, we knew that, it’s all over the news.

But he also writes that Perry Weitz (and the feds haven’t brought any charges against him or his firm) once worked for Weitz’s father-in-law, Morris Eisen. And Eisen was disbarred for little things like using a pick ax to make a pot hole bigger, or smashing a car with a sledge hammer to make the dent look bigger.   I wrote about Eisen six years ago after he was himself hustled by Bernie Madoff.

Back then I noted:

“Murray Eisen the hustler has now been hustled by Bernie Madoff. Don’t expect me to shed a tear for either of them.”

So the Post pulled that quote from my post six years ago, about Eisen being hustled by Madoff, to attach to a wholly unrelated story about Sheldon Silver. Exciting, huh!

But we all know what these three degrees of separation really means, don’t we? It means there weren’t any celebrities that could be found over the weekend that entered rehab. Or got married. Or punched out a photographer. Or “inadvertently” let a booby slip loose. Or were photographed eating a cheeseburger.

When Page Six sinks so low for stories that it uses me as boldface then you know we have a problem in the gossip industry. Let me be the first to say it: Gossip is dead. 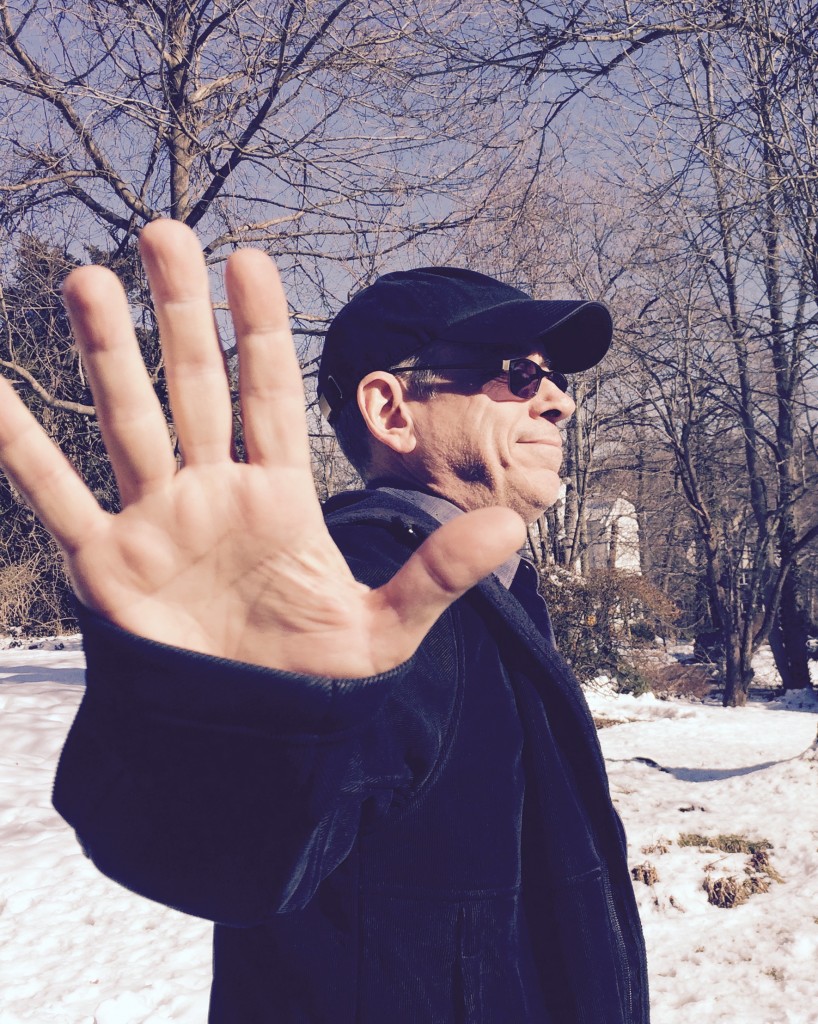 Or so I thought, until I found the scrum of photographers on my front lawn when I got home last night, itching for more on the Silver to Weitz to Eisen to Madoff connection. But as you can see from the photo here, I wasn’t quite ready for my closeup.

I know how this works: We live in a world that has gossip, and gossip must be written by men with keyboards. Who’s gonna do it? You? You, Lt. Johnson? I have a greater responsibility than you could possibly fathom. You weep for …

Oh, crap, that meme won’t work…but the film does have Kevin Bacon.

I’m on Page Six. The world is a funny place.

Update: To those spreading rumors about me with Bethenny Frankel, please stop. My wife reads this blog.