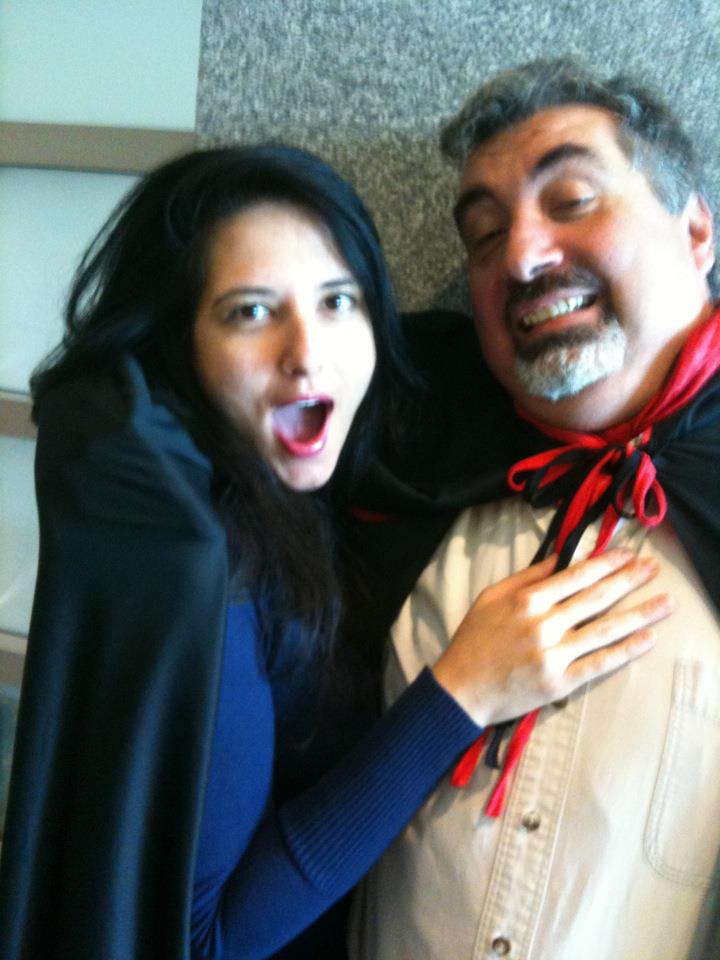 Dracula appeared in court in Queens this morning.

Spotted today in Civil Court, Queens County: Dracula. Playing nice before taking a bite out of his victim.

Reached by phone today — and who knew Dracula did interviews? –  he told me he did this once 5 or 6 years ago, and it was a big hit, so he has made it a tradition this time of year. He’s argued motions like this, and tells me he once also appeared for a bench trial in the garb. Neither the judge nor defense counsel protested.

Dracula’s legal work — and I know you were wondering what he did during his waking hours, and the answer seems to be plying dark courtroom hallways out of the sunlight — is that of No-Fault collections for medical providers. This little niche of the law is necessary because No-Fault insurers have this nasty tendancy to cut off benefits after brief exams, that many call shams, of the injured. Dracula, in other words, and contrary to the expectations of the world, is a good guy, fighting against insurance companies. Who’d a thunk it?

Perhaps when Dracula returns from court he can assist me in getting rid of the zombies that came to take over this blog this morning.

Dracula is Dave O’Conner and  the frightened damsel in distress is local attorney Meryem Toksoy.

Photo is courtesy of my courthouse spy, Samson Meyer Freundlich. 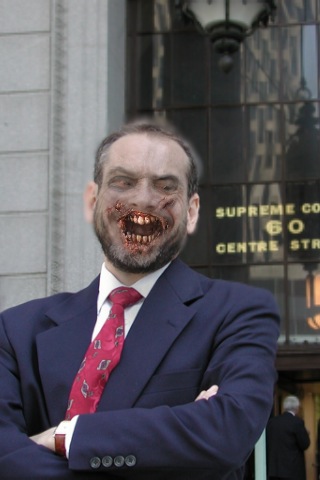 No more Mr. Nice Guy. I need to toughen up my image a bit.

I started thinking of this two years ago on Halloween when I walked around the neighborhood with the Bogeyman.  Maybe, I’m just too nice. So I took a shot at Monster Energy drink and its monstery conduct. That felt good, but maybe I was still too nice. After all, when I put this blog up for sale on eBay, I didn’t get any bites; something must be wrong.

So this year I’m going all in with a change of ‘tude, as the kids like to say. Since I’ve finally been convinced by the social media experts that I am doing this bloggy thing all wrong, it’s time to pull the trigger on change.

Henceforth (one of those big lawyer words I should use more often), I’m going to use this blog to be more aggressive and talk about me. Grrr. You can see the new me in the masthead and in the picture at right, as I decide to toughen up my image. (And if you’re reading this  in email or RSS feed, you’re just going to have to visit the actual website to see the masthead to know what I’m talking about. Offer expires at midnight tonight.)

Part of my current inspiration comes from the Steven J. Baum law firm, a Buffalo area foreclosure mill for banks, who last year mocked, ridiculed and derided, at a Halloween party, the poor whose homes they were taking. And really, isn’t revelling in the misery of others part of what being a lawyer is about? Never mind that the firm, according to the New York Times:

…recently agreed to pay $2 million to resolve an investigation by the Department of Justice into whether the firm had “filed misleading pleadings, affidavits, and mortgage assignments in the state and federal courts in New York.”

Now that is what we call aggressive.

And then there is the other kind of aggressive,  for which we turn to one Horace Hunter. He was snagged on ethics by the State of Virginia for using his blog for advertising purposes, and therefore requiring a disclaimer. It seems he likes to talk about himself a lot on his blog. So Virginia demanded the disclaimer as per its ethics rules, and Hunter snapped back with “This Week in Richmond Criminal Defense is not an advertisement, it is a blog.”

He lost, and has now been officially admonished. But. You gotta love that aggressive attitude, and isn’t that the point? Grrr. And look at all that press it earned him! He must be doing something right. Here’s a sampling: The Lawyerist, Simple Justice (“If a writing is self-promotional, it is marketing and not a web log, blog or blawg (or any other variation on the theme).  Stop calling them all blogs. They’re not.”), My Shingle (“Hunter’s “blog” really isn’t a blog at all, at least as I define the term. It’s more akin to a running news feed, with at least half of the “posts” reporting on cases that Hunter or his firm handled…”) and more.

But Hunter, of course, didn’t originate the idea of devil may care, sell your soul self- promotion. No siree. Take a look at some of the other ads out there…..ahh, these are six you really have to admire.

So let’s forget about professionalism and results. Forget competence and knowledge. Forget the tarnished image of the profession. Forget about clients. Let’s use this blog to talk about what really counts: Me.

It’s become clear that, in order for me to compete in this brave new world, I’m going to have to take some drastic steps. Ergo, the new me.