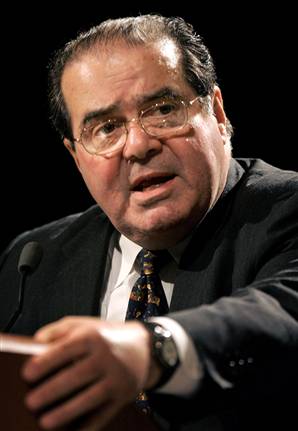 It seems that my Brooklyn-born guest blogger today, Jay Breakstone, was none too pleased with the temperament of Queens-raised Antonin Scalia yesterday while dissenting in the landmark case of Obergefell v. Hodges that legalized same sex marriage in all states.

And Breakstone, an appellate wordsmith, has a few words to Justice Scalia, on minding his manners. From one city kid to another. And so, without further ado, a few comments on Nasty Nino…

Comments about Justice Scalia’s dissent in Obergefell v. Hodges, the gay marriage decision from the Supreme Court, have been grossly unfair. As one wag once said, even Hitler was a hell of a dancer. If we look hard enough, we can overlook the worst in anybody, even Justice Scalia.

Sure, Justice Scalia may have been unhappy with the rigors of real-live legal practice at Jones, Day before moving on to academia and “public service,” but that’s okay, isn’t it?  You don’t really expect Harvard magnas and editors of its law review to work for a living like the rest of us, do you?

Sure, he may be acerbic in his writing, but he’s really funny. Just before describing the majority opinion in Obergefell as the product of “hubris” amounting to a “judicial putsch,” Justice Scalia identified the actors in that putsch—his fellow justices— as follows:

“[T]his Court . . . Consists of only nine men and women, all of them successful lawyers who studied at Harvard of Yale Law School.  Four the nine are natives of New York City.  Eight of them grew up in east– and west-coast States. No one hails from the vast expanse in-between. Not a single Southwesterner or even, to tell the truth, a genuine Westerner (California does not count). Not a single evangelical Christian (a group that comprises about one quarter of Americans), or even a Protestant of any denomination.”

See how funny that is?  Well, how about that this is being written by the first Italian-American justice?

What confuses me is that Italian-Americans only comprise only 5.6% of the American population. So under Justice Scalia’s theory, how are they entitled to two justices (Scalia and Alito) of their own?

How about if we join them with the Jews? After all, there are Italian Jews, such as Fiorello LaGuardia (descended from a great rabbi on his mother’s side.) That would give Justice Scalia another 1.4%, or 7% in total.

Still, in ScaliaMath, not a significant enough cultural/ethnic/religious group to warrant the appointment of two whole justices (fractional justices being ignored.)

Maybe Justice Scalia could he be the “short people’s justice?” After all, he is only 5’ 7” tall and is probably the shortest male on the Court. However, RBG is fully notorious at barely 5 feet tall.

If the anti-Scalia group is still less than comfortable with the absence of any Protestants on the present bench (Scalia is a Roman Catholic), then they can always be reminded that for its first 180 years, almost all the justices were Protestants – – and male at that.

No, Nino, we can’t choose our justices based on who they are, where they come from, or who they pray to. But we can surely choose them based on their courtesy to their colleagues and the ability to see beyond themselves.

We don’t think it’s particularly clever to refer to colleagues who don’t think the way you do as members of a “putsch,” knowing (and you know everything) that the term refers to the attempt by Hitler and his Nazi Party to seize control of Bavaria in 1923, especially when two of your colleagues are part of that over-represented group on the Court, the Jews.  At best, its self-centered and narrow beyond excuse.

In the final analysis, perhaps you’re just not a nice person.  Or maybe you’re this way only when you lose, twice (Obamacare on Thursday), in the same week. But even Evangelicals would only call that being a “sore-loser.”

Nasty, even in what one believes is a last-ditch defense of all that is good about American democracy, ill-becomes a Justice of the Supreme Court.