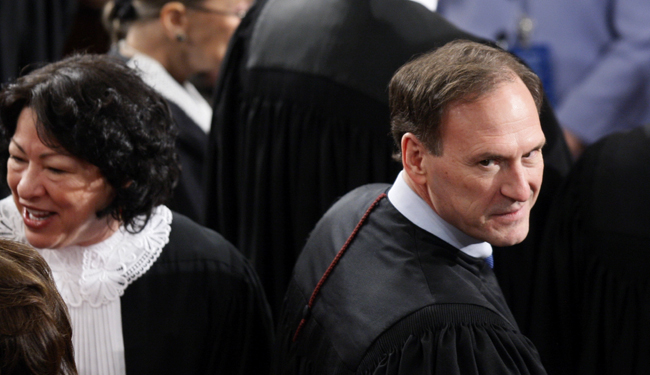 Samuel Alito at 2010 State of the Union. Photo by Charles Dharapak/AP, via The Atlantic

It’s one of those things that lawyers learn early on: keep a professional demeanor in court.  You will get your chance to argue. Making faces while your opponent argues exposes a childish temperament.

But someone forgot to teach that to United States Supreme Court Justice Samuel Alito, or he failed to learn the lesson. According to this piece in the Washington Post today by Dana Milbank, Alito has been acting like a middle schooler with his facial expressions when others dare to disagree with him.

I won’t steal all of Milbank’s words, but here are a select few as he describes Alito’s facial expressions when a judge 17 years his senior dares to have a different opinion than he does:

When Justice Ruth Bader Ginsburg read her dissent from the bench, Alito visibly mocked his colleague.

Ginsburg, the second woman to serve on the high court, was making her argument about how the majority opinion made it easier for sexual harassment to occur in the workplace when Alito, seated immediately to Ginsburg’s left, shook his head from side to side in disagreement, rolled his eyes and looked at the ceiling.

If this happened as Milbank describes, there is frankly no excuse for it.  I’ve seen judges admonish counsel who did this during oral arguments.

But it wasn’t the only time Milbank saw this:

Days earlier, I watched as he demonstrated his disdain for Elena Kagan and Sonia Sotomayor, the two other women on the court. Kagan, the newest justice, prefaced her reading of an opinion in a low-profile case by joking that it was “possibly not” the case the audience had come to hear. The audience responded with laughter, a few justices smiled — and Alito, seated at Kagan’s right elbow, glowered.

And the country as a whole watched this during the 2010 State of the Union when President Obama criticized the court for allowing unfettered corporate spending in political campaigns with its Citizens United decision, with Alito shaking his heads and mouthing a protest. The other justices kept their poker faces intact.

The eye-rolling behavior witnessed yesterday by Milbank, by the way, was also noted by Garrett Epps writing for The Atlantic. He noted about the inexcusable rudeness:

I suspect that the cause of cameras in the Supreme Court suffered a blow on Monday. I am glad the nation did not see first-hand Justice Samuel Alito’s display of rudeness to his senior colleague, Justice Ruth Bader Ginsburg.  Because Alito’s mini-tantrum was silent, it will not be recorded in transcript or audio; but it was clear to all with eyes, and brought gasps from more than one person in the audience.

Once upon a time Alito was a federal prosecutor. Did he roll his eyes and make faces to the jury back then when defense counsel spoke? Or was he able to refrain because, as a prosecutor, he could pick the cases the wanted — ones that, perhaps, had overwhelming evidence in his favor — and was never seriously challenged by an equal?

If I were a judge and saw that type of disrespectful conduct from counsel, I would think in terms of admonishment. Repeat conduct could be subject to sanctions.

Notwithstanding this, I’d love to meet him. With all his facial tells, perhaps I can persuade him to come by for a poker game. 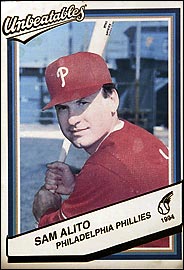 Justice Sam Alito (or not?)

Today is April 1st. It’s also opening day for most baseball teams. So if you’re a Mets fan like I am, it’s an interesting happenstance, no?

But if you came here hoping for an April Fools’ Day gag, you’re going to be disappointed. It’s just a quickie quiz on Supreme Court Justice Samuel Alito and baseball.

Hoaxes have simply become too complicated and difficult for me to coordinate. The last couple of years I went through hundreds of emails setting up elaborate cock-and-bull stories. In 2011 it involved a 23-blog web ring. Last year I created a new web site just to hide what I was doing with over a dozen co-conspirators, since so many people were assuming I would use this site for trickery. If I did this again, my wife would kill me. Then she would divorce my rotting carcass. Even fun has its limits.

Also, it’s nice to retire before I go stale and start putting out lame crap.

But just because I’ve retired from gags doesn’t mean I can’t bring you a modest little quiz regarding law and baseball and focusing on Justice Alito pictured here at right on a baseball card from a fantasy baseball camp.

Or maybe it’s a fake card. This is, after all, April Fools’ Day and do you really believe anything I write? I can almost see your brain cells pulsing as you look to see who will get hornswaggled.

Cheating on this poll is easy, as anyone over the age of eight can use the Google. But if you cheat, a kitten will die and someone will turn you into an anti-kitten Facebook meme that will quickly devour the web because that’s what the web does best and it would really suck for you and then your spouse, kids and siblings would divorce your dead rotting carcass. I’m sure you don’t want to test that theory.

And you know I’m right, anyway, or you wouldn’t have read this far.

Where was I? Oh yeah, the poll.

Each question has a link. The link contains the actual answer. But you have to answer the poll first before you click the links to see if you were right. It’s all about the kittens, remember? If you didn’t remember the kittens from three short paragraphs ago then you’ve got bigger problems than I can deal with here.

But cheating is also about your soul. Don’t screw with your soul, it ain’t worth it for a little quiz, and someone might scratch “cheater” on your headstone one day, and that one day will probably be April 1st just for the karmic kicks.

In this quiz, everything below is true, except for one item. Which item below is false for SCOTUS Justice Alito?

1. He once went to a Philadelphia Phillies fantasy baseball camp that produced the baseball card you see above (link)

3.  Because he plays in a fantasy baseball league he recused himself on a case dealing with the sale of baseball statistics to statistical services for fantasy leagues (link)

4.  There is a website that compares all Supreme Court justices to people in baseball.  John Jay, for example, is compared  to the first baseball commissioner, Kenesaw Mountain Landis. Justice Alito  is compared to flame-throwing right-hander Jonathan Papelbon, because Papelbon was supposed to be the next Roger Clemens while Alito was touted at his confirmation as the next Scalia. (Papelbon is now with Alito’s beloved Phillies.) (link)

5.  His childhood ambition was to become commissioner of baseball. (link)

You didn’t cheat, did you?