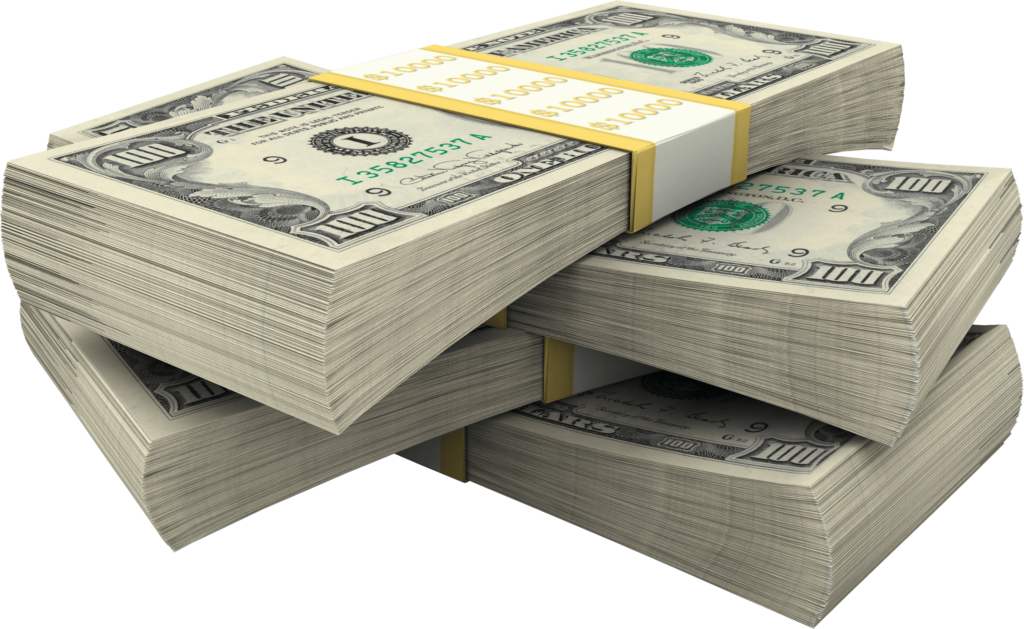 OK, the bill isn’t actually called #EricsLaw, that’s just the name I wish to call it since it stems from a post I made last August concerning one of my pet peeves: The ad damnum clause. That’s the pretentious Latin way we lawyer-types refer to the damages demand in a lawsuit.

Since this blog is actually cited in the bill’s memo [pat self on back], I figured I ought to tell you about it.

Yeah, I was writing about boring procedural things again. But you know what? Putting demands in complaints encourages lawyers to claim large dollar amounts out of fear that, if we make a demand too low, it may limit our clients’ recovery later. Oh, Mr. Plaintiff client needed five surgeries? Who knew way back then!?

And those big numbers lead to the very predictable consequence of lawyers (and our clients) looking fabulously stupid as the demands are always in the headlines. And the news always wants the money shot. Which thereby poisons the jury pool for every case.

It’s also despised by defendants, as they see it as an unfair trashing of Dr. Defendant, now being the subject of the headline grabbing numbers. The law was amended to abolish the practice in 2003.

Hallelujah!! No more stupid, telephone number demands made by lawyers to cover worst case scenarios or to, [spit, spit] get their names in the Daily News. Doctors were thrilled also. Win-win!!!

But I found in writing the Bolling piece that, lo and behold, because the case was not started in the traditional manner with a summons and complaint but, rather, with the rarely used and widely disfavored summons with notice that he was actually required to put in a demand.

Oops. It seems that when the Legislature amended CPLR 3017(c) in 2003 to prohibit the money demand, it forgot to list the relatively obscure summons with notice as one of the pleadings. This is how it now reads:

(c) Personal injury or wrongful death actions.  In an action to recover damages for personal injuries or wrongful death, the complaint, counterclaim, cross-claim, interpleader complaint, and third-party complaint shall contain a prayer for general relief but shall not state the amount of damages to which the pleader deems himself entitled.

And the section that deals with a summons with notice (CPLR 305) requires it for all actions except medical malpractice:

(b) Summons and notice.  If the complaint is not served with the summons, the summons shall contain or have attached thereto a notice stating the nature of the action and the relief sought, and, except in an action for medical malpractice, the sum of money for which judgment may be taken in case of default.

So it seems that my little blog posting on this inadvertent loophole was noticed up in Albany, because lo and behold — can I use that phrase twice in one posting? — there’s now a bill from Assemblyman Daniel J. O’Donnell to fix CPLR 3017 by adding the summons with notice (A. 8852) to the list of other pleadings where you can’t put in a specific demand for damages.

How do I know it was my little blog that did it? Well, it’s cited in the bill’s memo: 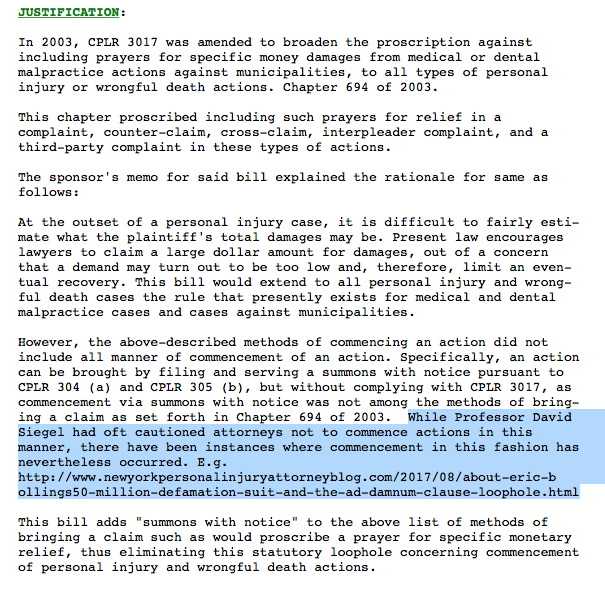 Where does that leave us? It leaves us with the need to also add a small fix to the CPLR 305 provision currently requiring the demand in a summons with notice, so that there isn’t any conflict of law with an amended 3017.

And, since we’re on the subject,  it also leaves us with getting rid of the need to put a demand in a Notice of Claim for New York City (GML 50-e), which must be filed within 90 days of an incident.  As if anyone actually knows how extensive the damages will be at the stage (Judge Sues City for One Million Dollars!), which is why it’s so stupid to have. It is already prohibited in every place in New York State except the City of New York (any “city with a population of one million or more”).

[Updated:  This post appeared on January 31st. On February 9th, the proposed legislation was updated to include the two changes I suggested above to CPLR 305 and GML 50-e.]

I think that these are the last existing vestiges of the demand for damages in this state. The Legislature dumped them from the Court of Claims (cases against the state) back in 2007, which I celebrated at the time.

And I’m going to call this #EricsLaw (Underline! Italics! Bold! #Hashtag!) — and it ain’t for Eric Bolling — since it seems to have come from my little blog posting and there doesn’t seem to be anyone else around to name it after.  And, by gosh, every law needs to be named for someone.

I would name it the far more interesting Turk’s Demand, but hey, I’m sticking with convention here.

One day someone can chisel on my tombstone — with or without the hashtag, I’ll be in no condition to complain — that I helped tweak the CPLR for everyone’s benefit, if it actually winds its way through both houses of the Legislature and gets signed.

Such an accomplishment. I’m all verklempt.

And here’s the kicker: The Bolling suit went, to absolutely no one’s surprise, absolutely nowhere. There are no other documents in the court file after the summons with notice was filed last August, not even an affidavit of service. No complaint or demand for one. No appearance by any defense counsel. Nothing. Zero. Nada. Zippo.

Bolling apparently filed for no other reason than to grab headlines and intimidate others who might come forward. This kind of legal filing, designed to intimidate by imposing the fear of litigation, even if wholly unfounded in law, is the reason that New York should pass anti-SLAPP legislation.

The anti-SLAPP bill previously passed the Assembly but remains oddly stalled in the Senate.  Who is it that’s in favor of frivolous threats that shut down speech, and has stalled the bill in the Senate?  Inquiring minds want to know.

Now that would be a terrific piece of reform. I’ve been frivolously sued twice over this blog, so feel free to stick my name on that one also. With or without the hashtag.