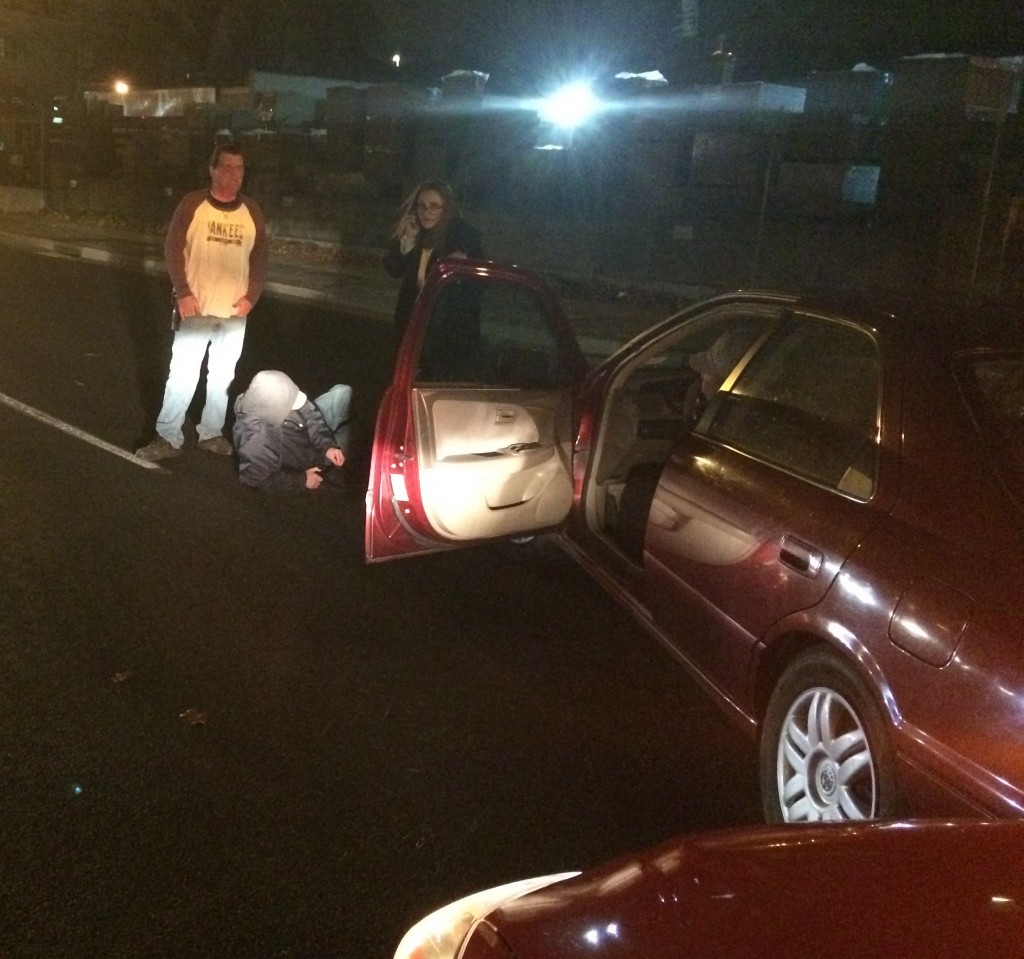 I’m going to start this piece in New Rochelle where I recently saw a pedestrian knockdown. I’ll end at the University of Virginia discussing a now (in)famous rape story reported by Rolling Stone. I hope to make it there in one piece.

On Friday night I became a witness. It was dark. It was raining. The pedestrian who came into contact with the vehicle in front of me was wearing dark clothes and wasn’t in a marked crosswalk.

You can see him here lying in the roadway in this photo I took a few minutes afterward as we waited for the police. The two people standing on either side of him in the headlights were Good Samaritans trying to make sure he wasn’t further injured by another car.

We were both making left hand turns onto this divided road.

Why blog about this? Because witnesses are important in cases, civil or criminal. Lawyers question witnesses all the time, to get information or dissect fact from fiction.

And as I reflected on what happened, I could hear me cross-examining myself in my own mind over this incident.

And the funny thing is, I would struggle to answer many of the questions. One reason is that, before the accident happened, I had no reason to “remember” that which was ordinary.

An example of a typical question asked of a witness in this plain-vanilla incident — and I call it that because there was no crime involved nor life-threatening trauma:

When did you first notice the car in front of you (that came into contact with the pedestrian)?

Answer: How the hell should I know? Because until something “different” happened, there was no reason to notice in the sense of discriminating that one car from any other car. When we drive we certainly see that there are cars near us so that we can avoid collisions, but unless one of the cars sticks out as “different” — perhaps a 1950s white Cadillac with big tail fins — we don’t really notice in the sense of looking at it with a view toward detail.

And when something does happen — in this case the car in front of me running over the foot of the pedestrian — we are so stunned that something has happened that we don’t sit there cataloging in our mind that which we’ve just seen. It’s more like, holy crap, did that really just happen?! The “story” is almost like fragments in the brain since we weren’t looking for it to happen.

Then comes the time of reconstruction in our minds when we try to fit all the pieces together. And I think reconstructing is a better word than remembering, as we start to use circumstantial evidence to put the story back together in our brains. So, for example, I didn’t notice the other car as I waited at the light to make the turn that resulted in the pedestrian being hit, but I know in hindsight that, since I was directly behind the red car at impact, I must have been directly behind her moments before waiting at the light.

Frankly, if I hadn’t snapped that picture you see here, I wouldn’t have even remembered the color of the car. Or the clothes the people were wearing. These things might have been right in front of my nose, but because they were “normal” they were unmemorable. Yet witnesses are asked to remember such details.

In addition, my ability to recollect is colored by the my own experiences: that of personal injury attorney. Who was at fault? A doctor behind the wheel may have observed (or remembered) different things than I did. Perhaps a tailor would seen yet different things about the people.

And no doubt the view of the incident differs further from the perspective of the pedestrian, the driver, and the two Good Samaritans. Like the old Japanese movie Rashomon — which should probably be required viewing for any trial lawyer — we all see different things from our own perspectives. This is neither good nor bad; it just is.

Now lets take this one step further, because I was a mere witness that was not directly involved, unlike an incident I wrote about 7 years ago. (Or at least I wasn’t involved Friday until the other driver backed into me as she rolled back off of the guy’s foot.)

I didn’t have my heart racing as an actual participant. I was not stopped dangerously on a bridge. There wasn’t a massive surge of adrenaline that shot my nervous system into overdrive. But if I was actually involved or in a dangerous spot? That would have surely have effected my mental state and made the act of remembering different.

And if I was the victim of a violent crime, then what? There’s a pretty good chance things would become even stranger to remember if the assault was sudden, as my mental state would be significantly altered. Whether it would be sharper or more confused, I don’t know and I hope not to ever find out.

Throw drugs or alcohol into the mix, and now what? Reconstructing could become even more complicated.

Remember, my event on Friday night should theoretically be  relatively simple: I’m not directly involved, not assaulted, without any artificial impairments. But it isn’t.

Criminal defense lawyers, of course, deal with these issues all the time, not just with the nuanced facts of a crime, but with the (mis)identification of people by witnesses.

And now we transition to Virginia: What do we see now with the roaring debate over the Rolling Stone article about the University of Virginia women named “Jackie” who said she was gang raped as part of a frat initiation? And Rolling Stone then pulling back on the story saying that they should have been more careful in checking sources?

Here’s a thought: How about instead of electing who to “believe” we just listen. And understand that news accounts rarely present all the facts. Or are only partially accurate.

Ignore those who tell you who you should believe when they have political agendas. Because accurately remembering sudden and traumatic events can be difficult. Even for simple stuff.

There is no reason to jump to a presumption of guilt against those accused. Nor any reason to disbelieve those that claim to have been assaulted.

Listening is good. It isn’t necessary to instantly have an opinion on who to believe, or not believe, especially when every single case is different and facts are often in dispute. We don’t usually get the benefit of being a fly on the wall, or having that God’s eye view of what happened. Asking questions and being quizzical are good; forming instant opinions and being adamant, not so much.

I am forever mindful of “subway vigilante” Bernhard Goetz being on trial, a white man who shot four black teens in the subway that, he said, threatened him. Outside the courthouse during the trial were two groups of protestors: Those who called him a hero for standing up to thugs, and those who accused him of being a murderous racist that should be jailed or worse.

But the protestors outside the courthouse all had a couple of mportant things in common: None of them were actually in that subway car and truly knew what happened, nor were they even in the courtroom listening to the witnesses try to describe a few moments of unexpected trauma. 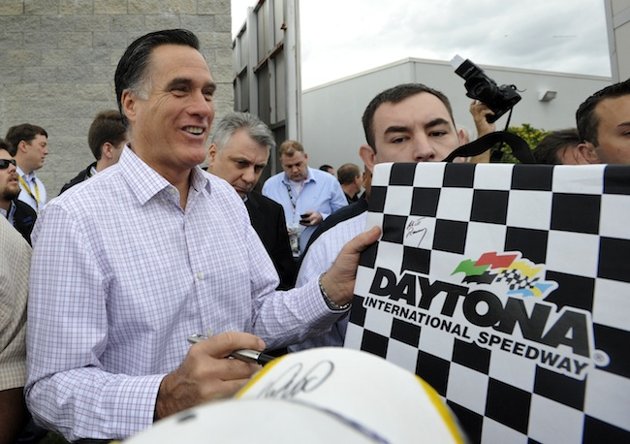 When I was a puppy lawyer my father gave me this advice about witness preparation: Never tell a client what not to say. Our conversation went like this:

Dad: If you tell a witness what not to say, the witness will blurt it out.

Dad: If you tell the witness, “Under no circumstances should you ever say Rumpelstiltskin” then the deposition will go like this: What’s your name? Rumpelstiltskin.

As Mitt Romney can attest, my dad was waaaay ahead of his time. In an article by Liz Goodwin on Yahoo! News (Why Mitt Romney can’t shut up about his money) she finds Romney has the same problem that my dad focused on when it comes to talk of wealth. Romney’s obviously been told, again and again, not to discuss it. And out it comes, time and again:

Over the space of a few months, private equity millionaire Mitt Romney has cavalierly bet a Republican rival $10,000 during a debate, enthused about the joys of “being able to fire people who provide services to me,” told Detroit voters that his wife drives “a couple of Cadillacs,” and said at the Daytona 500 that while he is not an ardent fan of the sport, he does have “some great friends that are NASCAR team owners.”

Goodwin delves into similar cases, from literature to baseball, about individuals stridently trying to avoid saying/doing something, and the problems inherent on focusing the mind that way.

This matters, of course, in the context of litigation if a lawyer tries to over-prepare witnesses by telling them what to say or not say, as opposed to finding out what happened and dealing with that. The witness, in the uncomfortable spot of a court proceeding and directed to do something that might not come naturally, will sometimes blurt out what the lawyer tried ever-so-hard to stop them from saying.

This is because our brain is always helpfully looking around for the very worst things we could do or say in any given situation, and then actively trying to suppress them with other, more appropriate thoughts and actions. The process has two parts–the unconscious, automatic monitoring of our forbidden thoughts, and the conscious, effortful way in which we distract ourselves from it. So when a person is trying not to think or talk about something–say, to pick an example at random, his personal wealth–he needs to both monitor the forbidden thought and distract his mind with other thoughts. This is called the “ironic process,” and it usually works, otherwise we would always be blurting out our secrets and insulting our loved ones.

Thus, today’s lesson in law: Beware the danger of trying to demanding a witness say or not say something, as opposed to finding out what happened. That, of course, is in addition to the ethical issues of having a witness fail to tell the truth.

There’s a lot more in the article, and it has strong relevance to the subject of witness preparation.